Pumped Up for HIV Prevention

Bridget Gooden knew that breast milk was the key to her newborn Regin’s ability to thrive because she was born premature. Bridget didn’t realize that being a breastfeeding mom made her vulnerable too – in her case, to HIV.  In fact, the risk of HIV for women is about three to four times higher when pregnant or breastfeeding.  Despite this, they are almost always excluded from clinical studies of HIV prevention products.

Bridget, who lives in Birmingham, Alabama, learned about a study by the Pittsburgh-based Microbicide Trials Network (MTN) in 2015 when Regin was about 18 months old and ready to be weaned.  The study, called MTN-029/IPM 039, was looking for moms like Bridget who were no longer breastfeeding but still producing breast milk and 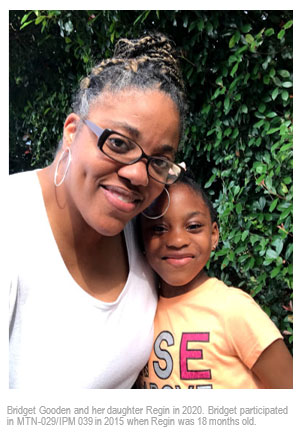 would be willing to use a vaginal ring for two weeks. They asked the study participants – a total of 16 enrolled at Magee-Womens Hospital of UPMC and the University of Alabama at Birmingham – to pump at certain intervals so researchers could assess how much of the product inside the ring – a drug called dapivirine – was transferred into their breast milk.

“When they did my intake, they explained that they wanted to see how much of the drug being tested would potentially come through the breast milk to the baby,” says Bridget.  “They also explained the process of the collection.  I was perfectly fine with it because if I can help any mom or her baby, I will.”

In designing MTN-029/IPM 039, the researchers relied on an approach MTN had identified back in 2006 – when they launched the first-ever study of a microbicide product in pregnant women – as crucial for studies enrolling pregnant and breastfeeding women. The study, MTN-002, started with a minimal dose of a gel called tenofovir administered vaginally within eight hours of scheduled cesarean delivery.  Only after thorough safety assessments was a successive study conducted with women who were further out from the time of delivery.

“I have always been troubled by the fact that the medical field does little to no research in pregnancy in general,” says Richard H. Beigi, M.D., president, Magee-Womens Hospital of UPMC and professor of reproductive sciences, University of Pittsburgh School of Medicine, who was protocol chair of that very first study. “We just proceed onward as if it doesn’t matter.  In MTN-002, we came up with the idea of doing studies with pregnant women using a step-wise approach backwards from delivery.”

This approach, Dr. Beigi explains, allows vital information to be collected while also ensuring the safety and well-being of women and their infants.  It has subsequently become the cornerstone for MTN studies conducted among pregnant and breastfeeding women.

MTN-029/IPM 039 was designed so that researchers could get preliminary answers about the safety of using the dapivirine ring during breastfeeding without exposing nursing infants directly. Study results, reported in 2017, found that dapivirine was absorbed in very low concentrations into the breast milk of women like Bridget who had used the ring.  Lisa Noguchi, Ph.D., director of maternal newborn health at Jhpiego and MTN-029/IPM 039 protocol chair, also notes that the dapivirine ring had no significant safety concerns among the lactating women who participated in the study. These results were especially important because the ring was simultaneously being tested in two large studies for its effectiveness to protect against HIV in women who were not pregnant or breastfeeding, and who used it for a month at a time. The monthly dapivirine ring is now under regulatory review.

Bridget says that being a participant in MTN-029/IPM 039 took commitment. “I know somebody has to be the tester of things to help out people who may actually need them.  Since I fit the bill – I was finishing up breastfeeding, I was a healthy female, and I wasn’t pregnant and I didn’t plan on getting pregnant, I was good to go.”

Given the encouraging results from MTN-029/IPM 039, researchers are now about to begin a safety and acceptability study of the monthly 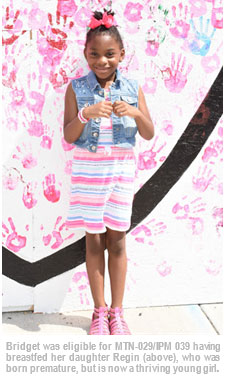 dapivirine vaginal ring in 200 African women who are actively breastfeeding and their babies.  The study, called B-PROTECTED (MTN-043), will also measure the effects, if any, this may have on their health.  A companion study, named DELIVER (MTN-042), was launched by MTN earlier this year and will enroll 750 African pregnant women. Researchers are hopeful both studies will lead to new options for HIV prevention that women can use any time during their lives – including when they are pregnant and breastfeeding.

In the end, none of this progress could have been made without study volunteers like Bridget who have generously given their time and energy for the benefit of other women.

“I always tell people, I don’t look at the wallet-size feature, I look at the mural on the wall.  There is always a bigger picture than just that one part that you play.  If my participation in this study could help just one person, then I feel like I’ve done my part,” she says.